Day 1 - Tribute to Guruji and his book Light on Yoga

The behind the story stories can be as interesting as the story itself. The history of the making of Light on Yoga is very interesting as many were involved in believing in Mr. Iyengar, in him believing in himself and the importance of this book to take the many years of hard work it needed for it to come to fruition.

Mr. Iyengar's daughter, Vanita writes in an article, "The Light on Yoga times..", about how her and Geeta would be in charge of typing the manuscript in the early days. Typing and retyping when changes or corrections needed to be made.  She writes how this helped her learn the art of concentration by needing to remain present while Guruji dictated.  During the writing of the book heavy floods came to Pune in 1961. Mr. Iyengar was away and as the floods entered the house the one thing his wife saved was the manuscript!
Rajiv H. Mehta writes in an article, "The Making of Light on Yoga - A Daunting Task", also about the time taken to write the book. During this time there was no computers to help make correcting mistakes easier or digital cameras for the many photos that were taken. Mr. Iyengar personally wrote, rewrote and corrected the manuscript for retyping. Mr. Mehta also commented that for every photo in the book at least 36 photos were taken that Mr. Iyengar posed for. It was not until after they were developed that Mr. Iyengar would know if they were suitable or not.

We all have a story about how we came to yoga.  It may have been a seed planted many years ago that you may or may not remember, an injury, spiritual quest or just a casual curiosity that led to dedicated discipline.
So when I look at that first page where the publishers information is given I know the journey it took to get it to that point is always a story in itself.
Namaste.
Pamela Nelson
Www.plnyoga.blogspot.com

Posted by Pamela Nelson at 7:41 AM No comments: 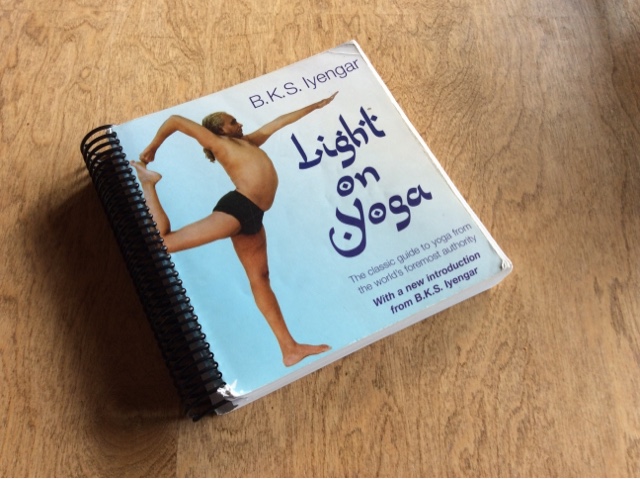 This year marks the 50th anniversary since the first publication of Light on Yoga was released.

Although it was first published in 1966 by George Allen and Unwin it was many, many years in the making.

In an article written by Mr. Iyengar and republished in Yoga Rahasya (vol.23, No.3, 2016) he writes on the struggles and hurdles in compiling this book.

He was asked to write a book on yoga by a publisher from Mumbai in 1958 so thus began the arduous task of writing and rewriting, many interjecting fear and discouragement in his project.

At that time Mr. Iyengar was teaching in Mumbai on the weekends and in this article he wrote of how he would work on the project on the train rides and ask his most senior students for input.

It was during one of his trips abroad to teach, and after many years of working on the book that he showed his manuscript to a student who knew someone that worked for George Allen and Unwin.
Mr. Yorke helped in editing the book and publishing it.

In a note he wrote to Mr. Iyengar on its publication was, "If a thousand of Light on Yoga are sold in a year take it as spiritual success".

With over 600 photos and 200 asana Light on Yoga is still a leading book on yoga even today selling over a million copies.

To show my gratitude to Guruji B.K.S. Iyengar for his dedication in sharing the gift of yoga with the world I will write about a page from the book for the next 50 days or more. It might be a quote, an idea to share, etc. As each page contains a wealth of information.

Posted by Pamela Nelson at 9:05 AM No comments:

Citta - the sanskrit word for consciousness, which is made up of three factors.  The mind (manas), intellect (buddhi) and the ego (ahamkara).  The mind has three functions - cognition, conation or volition, and motion.

From "Light on the Yoga Sutras of Patanjali", BKS says, "Mind acquires knowledge objectively, whereas intelligence learns through subjective experience, which becomes wisdom."

I like this quote because it always reminds me to do my practice.  I can continue to read...and reread many of the books I have and think I understand it, but not until I gain the realization through experience can I say I have wisdom.

Even this statement though isn't as simple as it seems as our minds and consciousness can be so unsettled that transforming the mind is a lifetime (or many) pursuit. Patanjali writes how fluctuations of the mind can be painful or non-painful and what might seem painful now or taking a lot of work may lead to a more pleasant outcome. In Mr. Iyengar's book, Light on Life he writes about the Five Modifications of Consciousness - citta vrittis.  They are correct knowledge (pramana), wrong knowledge (viparyaya), imagination (vikalpa), sleep (nidra) and memory (smrit).  These states occur in everyone and need to be studied on the path to true wisdom as one path may be damaging and the other liberating.  Inner awareness, linked with intelligence brings the body and brain into harmony to find your inner true guru.

Pamela Nelson
www.plnyoga.BlogSpot.com
email: plnyogastudio@gmail.com
Posted by Pamela Nelson at 10:45 AM No comments:

Hello,
I hope the first week into September has been good for you.  Getting back into classes and routine of the school year is always a busy time. There is still room in the yoga classes if you were still interested in joining.

Here are a few updates and changes to the schedule and also highlights of a few upcoming classes and workshops.

The Tuesday noon class at The Healing Garden Spa has been cancelled due to unforeseen circumstances at the building.  I will be starting a Thursday Noon class at Yoga Sublime again in October.  I hope some of you will be able to join me there at this time. If you had a 5 pass card from the Tuesday noon classes still valid please contact me.

September workshops and extra classes:
On Sunday, September 18th from 1:00 - 3:30p.m.I will be leading the first in a series called Calm the Breath, Calm the Mind: Linking Asana, Pranayama and Meditation.  There is still space if you would like to join. You do not have to attend all three in the series if you are not able too.  Contact me for more information.

Thursday, September 29th from 7:15-8:30p.m. - Timed Practice
This class will include a warm up and savasana. The timed practice is a fun, non-competitive way to explore your practice holding postures for certain lengths of time.

October Workshops:
Mini Inversion and Backbend workshop - Saturday, October 15th 11a.m.-1:30p.m. : not suitable if pregnant or menstruating. Modifications can be given but most postures will be too intense.

Classes are cancelled for Thursday October 20th and 22nd as I will be in London, Ontario for the Iyengar Yoga Association of Canada's AGM.  This year many senior teachers from across Canada will be leading workshops and classes.  It is a great opportunity for me to learn and share this wonderful gift of yoga.

Posters and more information can be found at my website/blog: www.plnyoga.blogspot.ca
email: plnyogastudio@gmail.com
Thank you for your time.  Hope you have a great day!
Posted by Pamela Nelson at 9:45 AM No comments: