Equipoise in body, mind and breath.  This balance needs to be found at every level of our body and our being.

Mr. Iyengar says that all of us begin with imbalances, one side that is more active then the other.  He says this more dominant side must be the guru for the inactive side to make it equally active.

"Precision in action comes when the challenge by one side of the body is met by an equal counter-challenge on the other.  This ignites the light of knowledge."

This knowledge or intelligence of the body must help us to find that lightness and relaxation in every pose.  If balance is kept by strength alone we are only using physical action.

To help gain this balance Mr. Iyengar says that one needs a firm foundation. Always watch your base and correct a pose first from the root.  This balance on the mat will help to balance your life off the mat too.  B.K.S. tells us that balance in the body is the foundation for balance in life.  No matter what position one is in, or in whatever condition in life one is placed, one must find balance.

This balance keeps you in the present!

Posted by Pamela Nelson at 2:50 PM No comments:

What is Yoga? The Yoga Sutras of Patanjali

Last month I mentioned the Yoga Sutras of Patanjali that B.K.S. Iyengar has based much of his yoga teachings on.  Although not a lot is known about the life of Patanjali, it is believed that he lived somewhere between 500 and 200 BC.  He is most widely known for writing the Yoga Sutras, which is a systematic treatise defining the most important aspects of Yoga theory and practice.  He has also been acknowledged for being a grammarian and doctor of Ayurvedic medicine.  On top of this he is known as the patron saint of dance in .

The legend surrounding Patanjali is that he may be the grandson of Brahma.  He was sent to earth to write a commentary on grammar and devote himself to the perfection of dance.  He came to earth as a tiny snake and grew into human form before his mother’s eyes.  She named him Patanjali.  Pata meaning fallen and anjali meaning “hands folded in prayer”. He is depicted as being half human and half serpent.  Patanjali is thought to have 4 hands.  Two are in the namaste position, one holding a sankha or conch that embodies energy and one a cakra, a disc that embodies the turning wheel of time or the law of cause and effect.

Mr. Iyengar says in Light on the Yoga Sutras of Patanjali that Patanjali’s works are followed by yogis to this day in their effort to develop a refined language, a cultured body and a civilized mind.  This is referring to all the great works of Pantanjali on grammar, dance and yoga.

Yamas – are the external disciplines of yoga, universal codes of conduct or the basic rules of living, teachings that help to lessen the suffering that is to come.
The yamas include:
Ahimsa: not harming, non violence, letting go of hostility in our words, thoughts and actions
Satya: honesty or truthfulness in every thought, word and action
Asteya: not stealing or not having any desire to have something that is not yours by untruthful ways of obtaining it
Brahmacharya: celibacy or self restraint over things that are not needed or take away from ones vital energy
Aparigraha: not hoarding or not holding onto things not needed by you so that someone else can’t have it, not wanting more, also letting go of negative thoughts and not holding onto them.  It means to be happy with what you have.
Niyamas – are the internal disciplines or individual rules of conduct.
The niyamas include:
Saucha: cleanliness – purity in mind, body, thoughts, words, deeds and actions
Santosa: true contentment with oneself, not trying to be like someone else or relying on external forces to make one happy
Tapas: desire to achieve a goal and having intense discipline or consistency to bring out the true self, free from attachments
Svadhyaya: self study, not just reading and studying the scriptures but putting them to practice in your own life, keeping yourself aware
Isvara Prandihana: study of the Scriptures: by stilling the body and mind one can reach pure awareness.

Posted by Pamela Nelson at 3:24 PM No comments:

The intention this week was to think about the important quality of lightness.  Finding that "effortless effort" even in our most difficult poses.

Mr. Iyengar says that when a asana (posture) is done correctly, the body movements are smooth, giving lightness to the body and freedom to the mind.  When done with heaviness though they are incorrect.

He says that when we lose this lightness, our bodies shrink.  At that moment the brain becomes heavy and dull, and you see nothing.

According to B.K.S. Iyengar we must immediately lift the intelligence of the chest and open the mind.  The corners of the chest are pillars: They should always be firm.  It is the spine's job to keep the mind alert.

So as we weave the past intentions in with this weeks intention of lightness really feel yourself extending from the core in each asana to find and maintain this lightness.

To end, a quote from p.41 of Light on Life, "Performance from the intellect of the heart, with lightness, firmness, and at the same time softness means it is a total stretch, total extension, and total expansion.  Asana done from the brain makes one heavy and done from the heart makes one light."

"Work from the heart."

Posted by Pamela Nelson at 11:10 AM No comments:

Intention of Week Three - Relaxation: In Every Pose There Should be Repose

As we move into week three of classes our intention incorporates the awareness and expansion of the past few weeks to find the state of relaxation in each pose.

Mr. Iyengar says that "There is always relaxation in the right position, even though you are fully stretching."
"When one extends and relaxes, there is no oscillation of mind or body."  He also says that, "When there is only exertion, one keeps a constant load on the muscles, which tire due to overstretching, and injury occurs. The mind does not balance when you force."

That is why it is important to begin with the foundational poses like Tadasana (Mountain Pose), to release the mind and quiet the cells, and to re-establish these poses during your practice.

Mr.Iyengar writes that inhalation is tension, exhalation is freedom.  All movements should be done on the exhalation, which purges the stress and tension from the body.

He says to find that "effortless effort" that Patanjali discusses in the Yoga Sutras in each pose.  Then you will find lightness...in body, mind and breath.

Posted by Pamela Nelson at 5:50 PM No comments:

Intention of week two - Dynamic Extension: From the Core of Your Being

The intention for this week of classes is to learn not just to stretch from the tips of the body but right from the core.
Mr. Iyengar says,"The goal of all asana practice is doing them from the core of your being and extending out dynamically through to the periphery of your body.  As you stretch, in turn the periphery relates massages back to the core.  From head to heels, you must find your center, and  from this centre you must extend and expand longitudinally and latitudinally.  If extension is from the intelligence of the brain, expansion is from the intelligence of the heart.  While doing asana, both the intellectual intelligence and the emotional intelligence have to meet and work together.  Extension is attention, and expansion is awareness."

Posted by Pamela Nelson at 5:49 PM No comments:

Intention of week one - Awareness: Every pore of the skin has to become an eye

Mr. Iyengar says that we think of intelligence and perception as taking place exclusively in our brains, but yoga teaches us that awareness and intelligence must permeate the body.  We often mistake motion for action, but most of the time our movements are done without awareness in the body or mind.  When we start to reconnect with our authentic self then the intelligence is felt in every pore.

He asks, "How does one develop this intelligence in the body?  How do we learn to turn our movement into action?"  The answer: "asana (postures) can begin to teach us.  We develop such an intense sensitivity that each pore of the skin acts as an inner eye."

When this happens the heart begins to feel what the brain is instructing.  They begin to work together....from the heart.

Another important idea Mr. Iyengar says is that students need to be self-aware, not self-conscious.  "You are aware of what you are doing without ego or pride."

This awareness brings life!
Posted by Pamela Nelson at 5:48 PM No comments:

Below is the basic instructions for Utthita Trikonasana - Extended Three Angle Pose.
This is meant to help your home practice.
Please make sure you consult your doctor if you have any health issues.
﻿﻿﻿﻿ 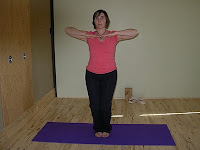 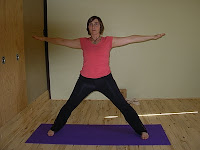 Bend knees and bring fingertips together and then step or jump the feet about 4 feet apart.﻿ 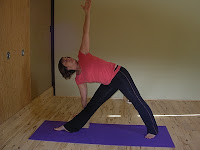 Turn the left foot in slightly and the right leg out 90 degrees.  Keep the front heel in line with the back instep and the front knee in line with the hip and second toe.  Keep the thighs of both legs engaged.
Exhale and extend trunk to the right, placing hand on floor or block.
Keep the side body lengthening evenly, back of the head and spine inline and lift the top arm up. Look up.
Keep shoulders stacked.
Press into both feet to come up.  Repeat on other side. 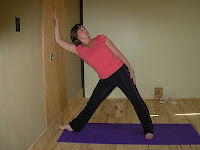 If difficult to reach floor or block and keep side body lengthening evenly press toes into wall and bring elbow to wall in line with shoulder. 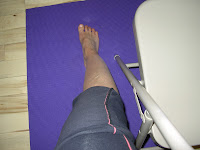 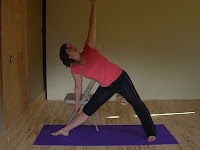 Or use a chair.  With a chair make sure the shinbone is in line with the leg of the chair.

Benefits:
According to BKS Iyengar this pose helps to tone the legs and strengthen the knees, ankles and back.
Can help improve digestion and relieve backache.

If you have neck issues do not look up but straight ahead or down.

Posted by Pamela Nelson at 2:24 PM No comments: